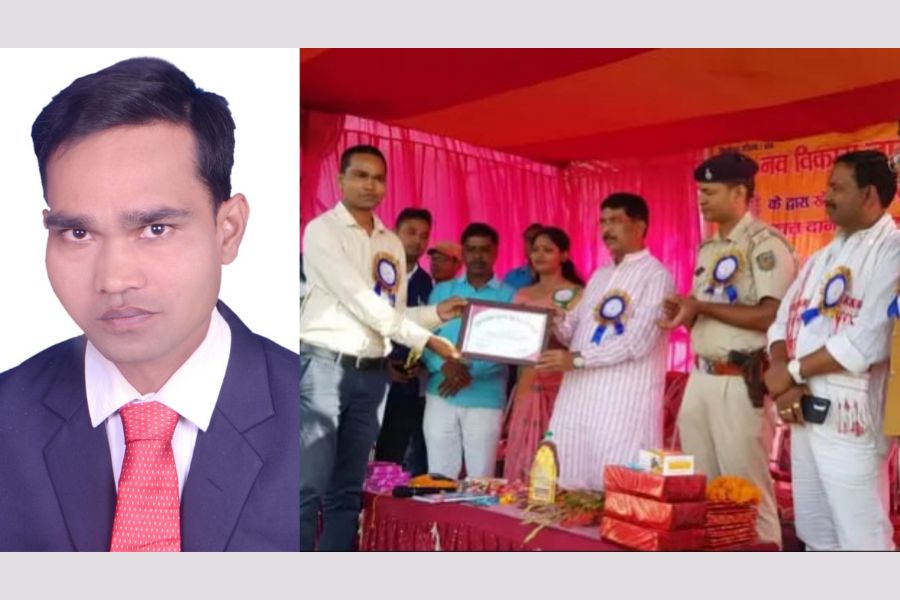 Under the National Education Policy,2020 for the creation of the Birhor-Hindi-English Dictionary for the conservation of the extinct Birhor language, Deo Kumar, a well-known writer of the country and abroad, was honoured by Rajya Sabha MP Prof. Aditya Sahu with the title of an excellent author.

Under the auspices of Nav Vikas Jagriti Sansthan, Mesra Mr. Amar Nath Choudhary was present on the stage as a special guest in the honour ceremony beside the institution Secretary Lilavati Mahto, Police Station Incharge Bipul Ojha, Meera, Kalicharan, Asha etc. were present on the stage.

The book was released by Padmashri Bulu Imam, and he described this book as a unique publication of the 21st Century. Prof. Mohan K Gautam, Vice-Chancellor of the European University of West and East, Netherlands, said that National Education Policy,2020 has been implemented by the Ministry of Education, Government of India to promote and Birhor language has been included in the language of grave danger by UNESCO. As such, this dictionary should be included in the curriculum. Dr. Netra P. Paudyal, a research scholar from the University of Kiel, Germany, said that the illustrated dictionary written in three languages would not only help Birhor Children to learn their mother tongue but will also help linguists to learn the common vocabulary used by Birhors.On occasion, Aditya Sahu, Rajya Sabha MP, said that big works are done with such efforts. It is a matter of pride for all of us that a young writer of the Capital of Jharkhand State has created a dictionary of an extinct tribe which is proving to be profitable. He is fulfilling PM Modi’s dream to conserve the mother tongue of PVTG Birhor to promote National Education Policy, 2020. We wish for a bright future for the writer and to keep shining the name of the state with such works.

Yes, you guessed it right we are going to talk about Himanshu Choudhary who is the founder of Model Makers